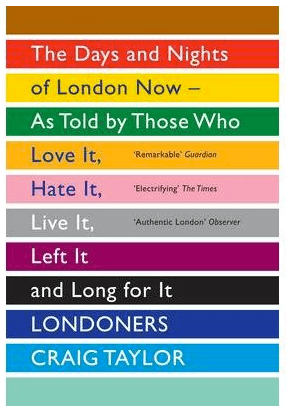 London • Londoners: The Days and Nights of London

Here are the voices of London – rich and poor, native and immigrant, women and men (and a Sarah who used to be a George) – witnessed by Craig Taylor, an acclaimed Canadian journalist, playwright and writer, who has lived in the city for ten years, exploring its hidden corners and listening to its residents.

“From the woman who is the voice of the London Underground to the man who plants the trees along Oxford Street; from a Muslim currency trader to a Guardsman at Buckingham Palace; from the marriage registrar at Westminster Town Hall to the director of the biggest Bethnal Green funeral parlour – together, these voices and many more, paint a vivid, epic and wholly fresh portrait of Twenty-First Century London.”