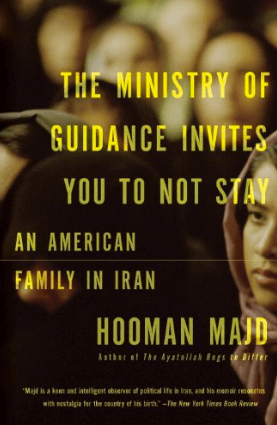 Tehran • The Ministry of Guidance Invites You to Not Stay: An American Family in Iran

“In February 2011, Hooman Majd disembarked at the Tehran airport, a place he had passed through many times to visit family or accompany a news crew. But this time he had his wife, Karri; his infant son, Khash; and an oversize stroller in tow—and plans to stay for a year. Few American journalists gain entry to Iran; for Majd, the son of a diplomat under the shah and the grandson of an ayatollah, it would be the first time he had lived in his homeland since childhood. In The Ministry of Guidance Invites You to Not Stay, he recounts both his family’s domestic adventures and a tumultuous year in Iranian politics. The result is an unforgettable portrait of an elusive country whose government, in the more than thirty years since its Islamic revolution, has been the United States’ most intractable nemesis.”