Vicente at the farm 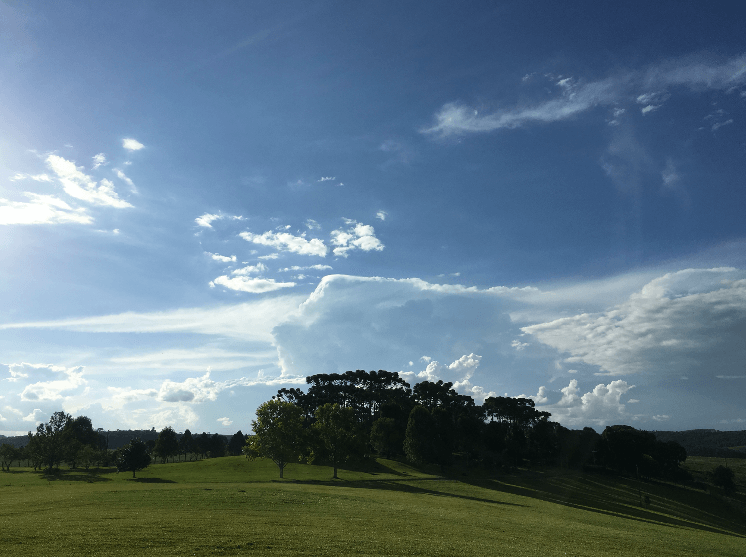 This is where the house is located. Quite nice, isn’t it?

From the second half of 2017, I took a new turn in my endeavors. After many nice meals in farm-to-table restaurants and eye-opening books like Dan Barber’s “The Third Plate” and Michael Pollan’s “The Omnivore’s Dilemma”, the world of food production, nutrition, and self-reliance started attracting a lot of my attention. So I did what I always do, I immersed myself in books and courses to learn as much as possible about how to start this new project. All of a sudden, my bookshelves started filling up with books like Organic Growing, Permaculture, Soil Amendments, and Farming. I bought a pair of wellies and off I went to my Permaculture Design Course and to a few other farm experiences. Now even the model and actress Isabella Rosselini is following my steps 😉 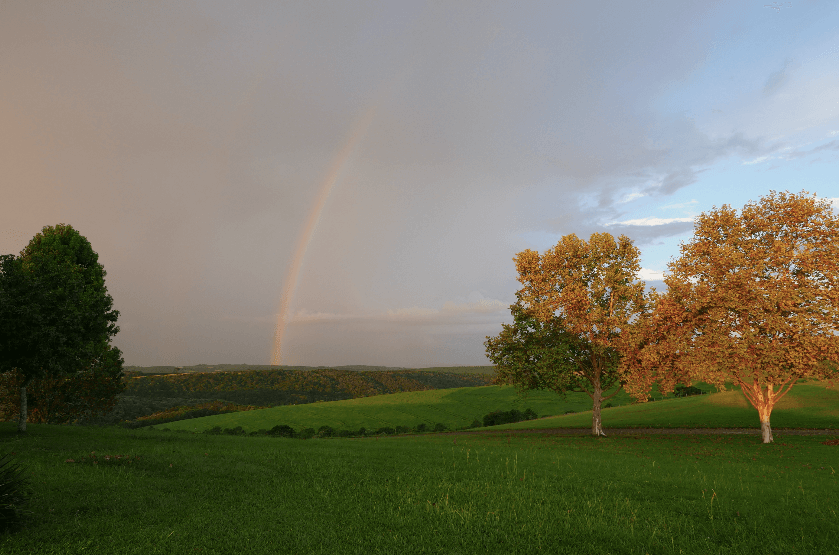 I love observing the sky as it changes throughout the day.

To put things into practice I started traveling often to my family’s farm. It is a 3-hour drive from Curitiba and the perfect place to experiment at very low start-up costs. From November 2017 until late March 2018 I went there religiously every Thursday and came back to Curitiba on Tuesdays. Half of my week was spent at the farm. Not much wi-fi and low 4G coverage. Summer heat and mosquitos. But I loved it. I still go there quite often, but the rhythm has slowed down as winter is approaching and the test fields have been sown and covered. Now I need patience to see things growing. 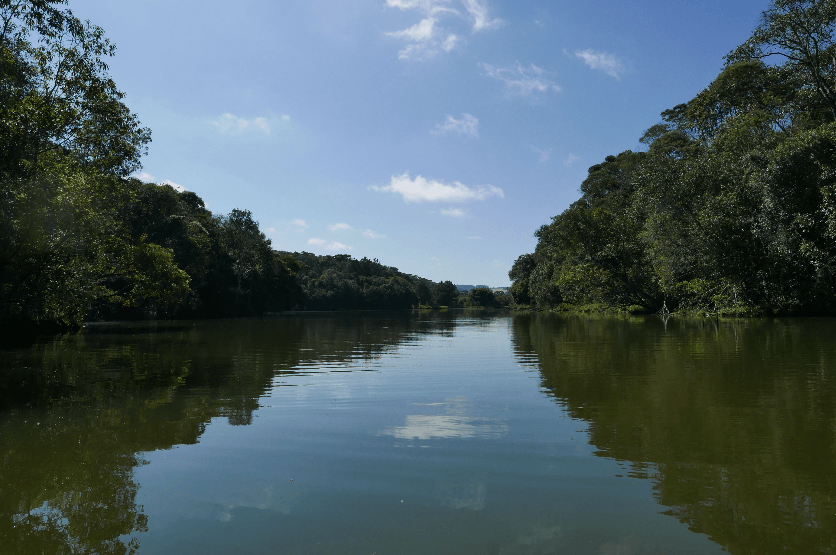 There is a lake where you can mingle with nature.

I also planted dozens of trees around the house, from fig and olive trees to raspberry and blueberries. I opened a vegetable garden behind the house where there was just grass growing and, on a battered patch of grazing fields, where the soil was quite hard, I planted nitrogen-fixing plants with deep roots to test soil amendment. Oh, and I also installed a rain collection system on the roof of three barns.

It all feels a bit surreal still. I love traveling and I love cities. But I also love being there in the middle of the nowhere, with silence and nature all around. Once the buds sprout and you see a green forest where there was once dirt, an incredible feeling takes over. Most of the work is very physical and I like it. But there is also an intellectual part of thinking, taking decisions and experimenting that makes the venture exciting. I am probably making thousands of mistakes, but better make it poorly at first than not make it at all.

Trees take a long time to grow. In a way, it is a bit frustrating because I would love to see a new canopy covering the ground. But some of the other plants grow quite fast. I still don’t know exactly what I really want to do with this new experiment. All I know is that I like it a lot and ideally I would live in a place full of trees, plants, and animals, not far from a city. If it is going to be near Curitiba, Auckland or Milan, who knows.

I am doing all of this in the middle of agribusiness territory. The farm grows corn and soybeans the industrial way. There are days I can smell the pesticides in the air. After a lot of discussion with the family, we managed to start converting the land closest to the house in grasslands for cattle. It will take two to three years to create a kind of buffer zone. The people working near the house also stopped using sprays and chemicals, especially on the orchard and to beautify the grass. There are lots of frustrations and battles I don’t want to fight or can’t win. The place is not just mine and it is rather big. Oftentimes I look around and all my 5 months of wheelbarrowing up and down, shoveling, moving grass here and there look invisible. Now there is drought. My trees are thirsty. But it has been a great learning curve and it is challenging me physically and mentally. However, I must meditate and know that things happen one step at a time. So I will keep you updated.

PROJECT 1: VEGETABLE GARDEN IN ZONE 1, BEHIND THE HOUSE 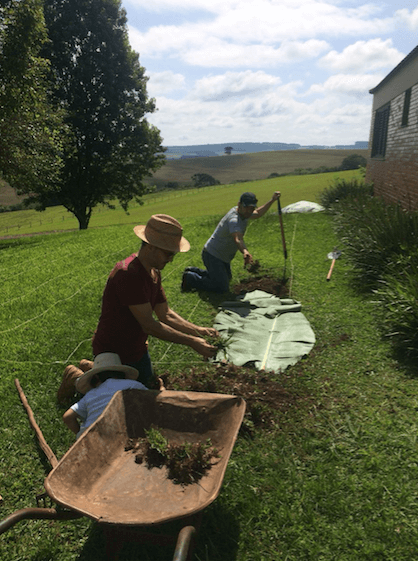 One of the projects was behind the house. Where there was grass, I started taking it away to plant some trees and vegetables. The banana leaf is to protect the open soil from the sun rays. I tried to till as little as possible in the “no-digging” method. 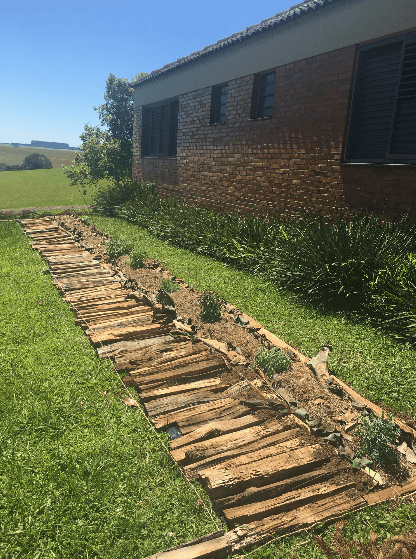 The first line was ready after a lot of work. We planted herbs and covered the ground with dry grass. The wood was placed to create a path. 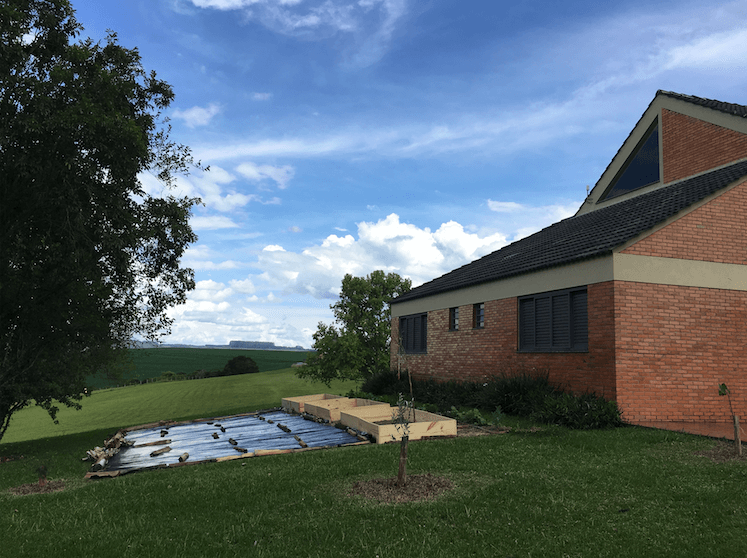 I placed a black plastic sheet to kill the grass without the need of glyphosate. Will dispose of the plastic accordingly, no worries. And I placed three framed wooden areas. You can see a few trees that were planted nearby to grow organic matter to cover the vegetable garden and protect it from the blazing sun. 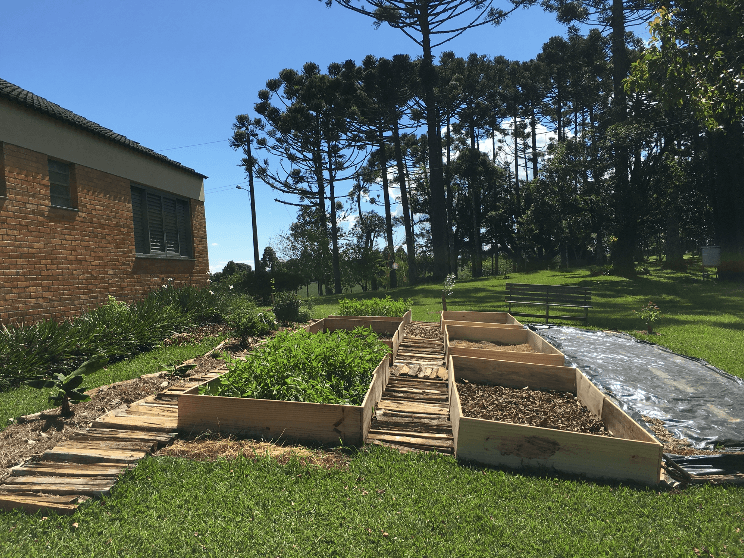 A few weeks later I set up three more wooden frames. On the first three, you can see the little nitrogen-fixing plants growing. It was sunny and warm, so they grew quite fast. 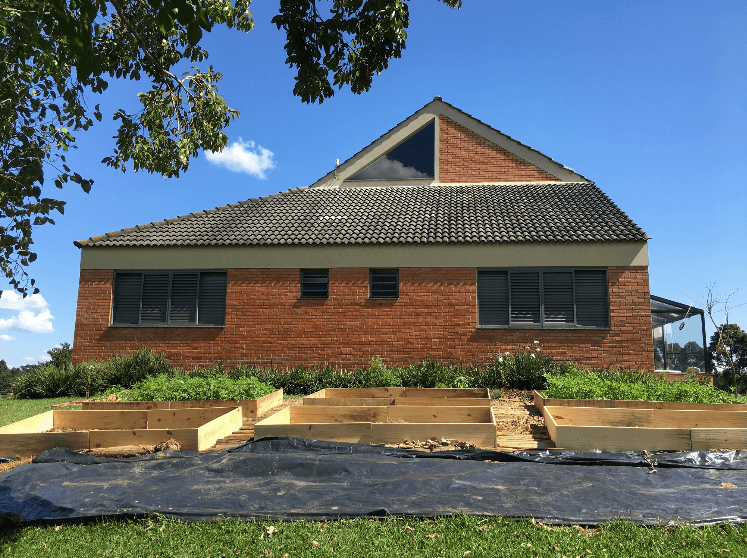 The area viewed from a different perspective. It is quite inclined, but there is plenty of sunshine there (though I may have to cut parts of the tree you see on the upper left corner). 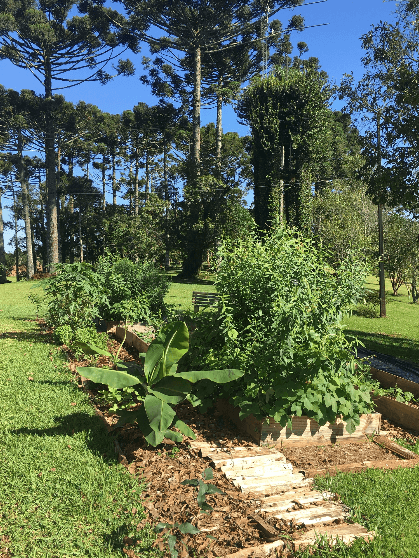 Three months down the line and it is very green. Even the banana tree is going strong. 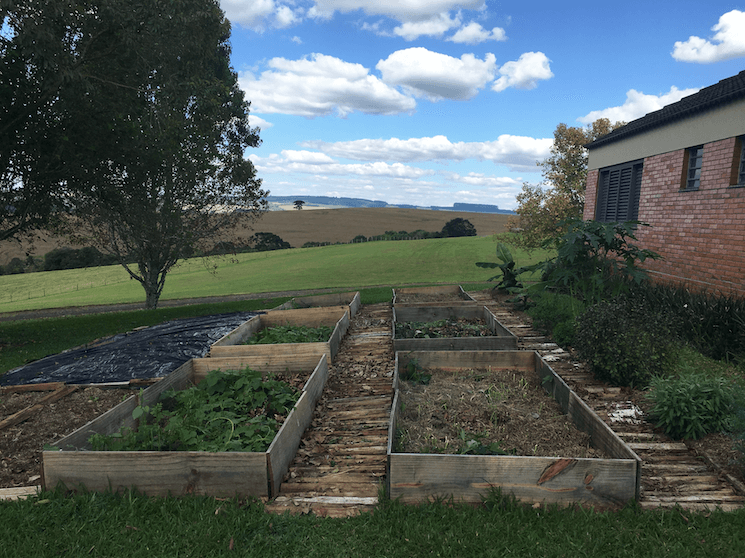 Now I cut it all down so leaves and stems can decompose and make the soil rich for the spring sowing. Notice that the first line, where the herbs and banana tree was planted is going strong. There is also a papaya tree there (I hope it survives the winter frost). 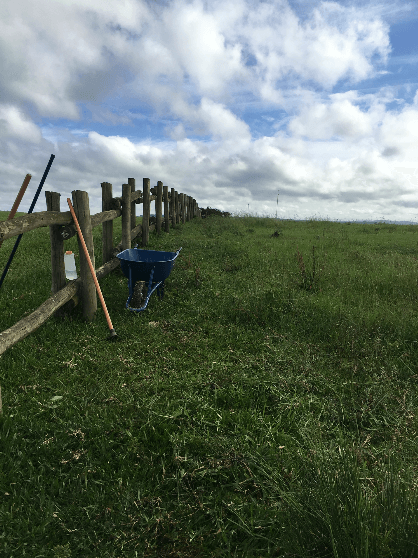 This fence divides the grass near the house from the grazing fields where the milk cows and horses stay most of the time. The soil is quite compact and everybody was telling me I had to go in with a tractor if I wanted to plant stuff there. Stubborn as I am and following my books, I decided not to follow such advice. 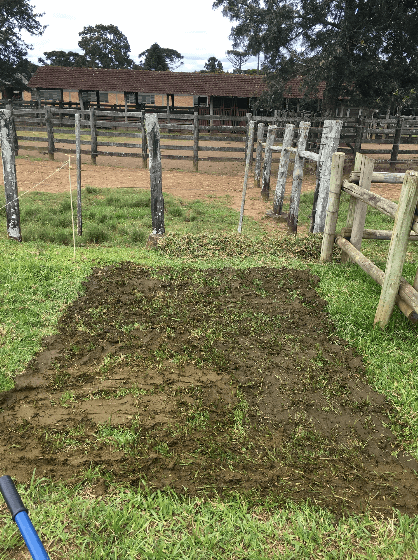 With a shovel, I took most of the weeds out and spread fresh cow manure before broadcasting seeds. 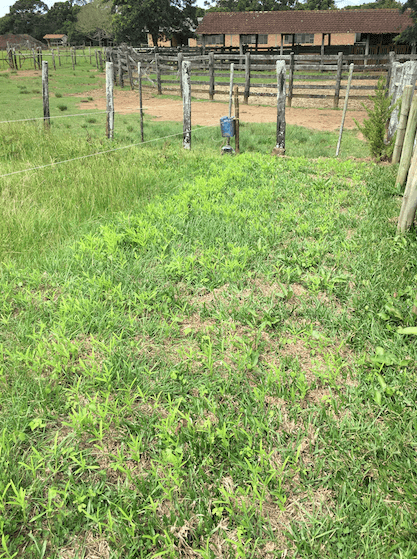 First signs of life… with a lot of grass around. Grass grows much quicker and has a tendency to take over the ground. 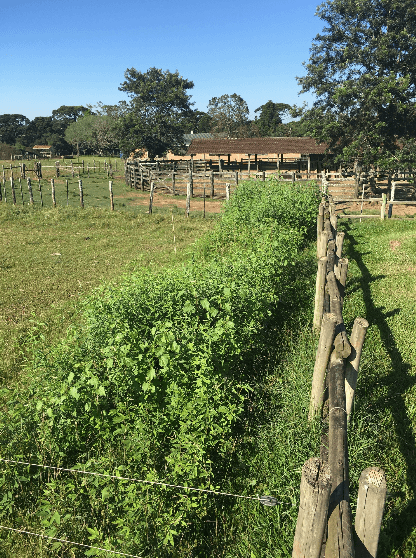 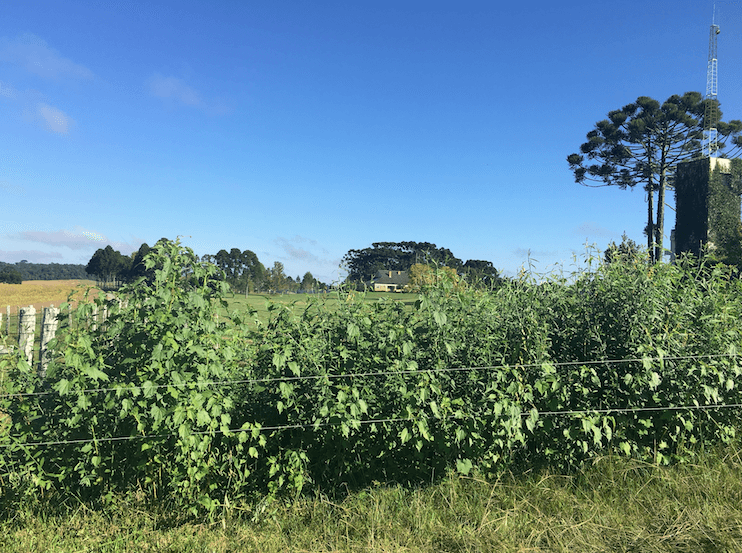 My new nitrogen-fixing forest with some sunflowers that will bloom shortly. I also planted some local trees on the borders. Let’s hope they will grow healthy.

PROJECT 3: CLEANING UP THE OLD VEGETABLE GARDEN AND EXPERIMENTING 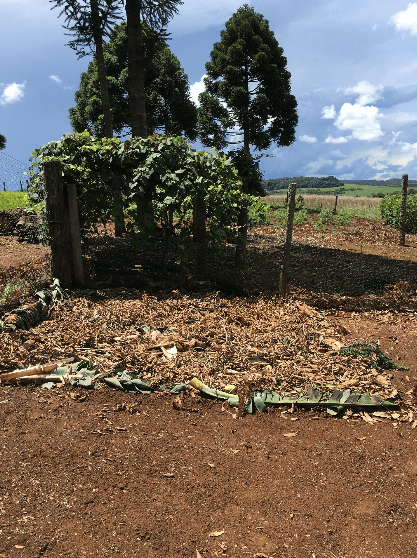 This is how the place looked in November 2017. I started cleaning the ground and covering it up with cut grass. 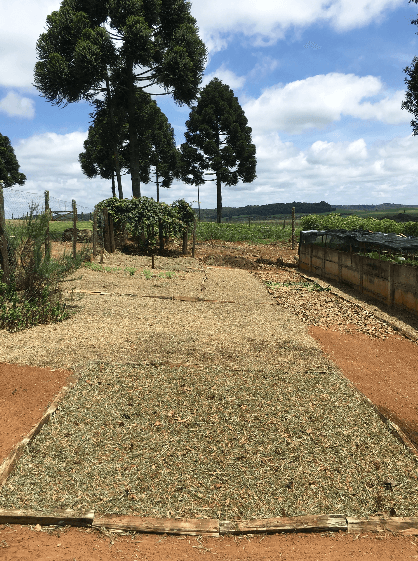 Every week I would increase it by another “square”. 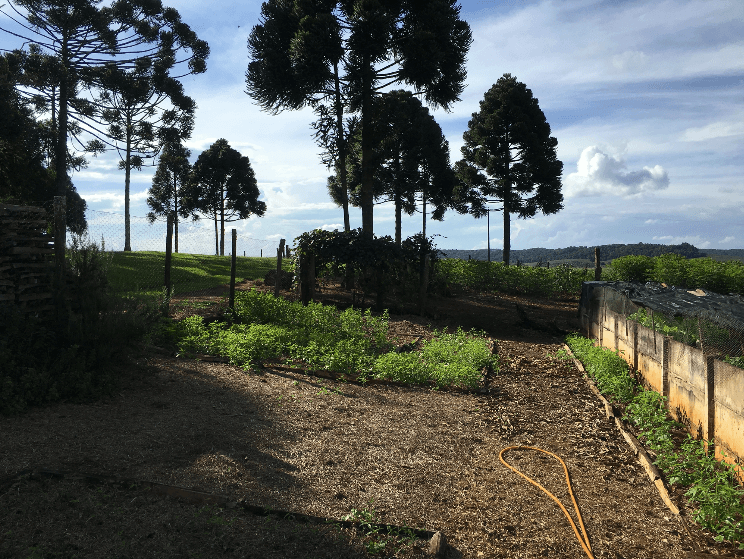 A few months later the seeds were starting to bloom. I planted Crotolaria Juncea and a local bean (Feijão Guandú). 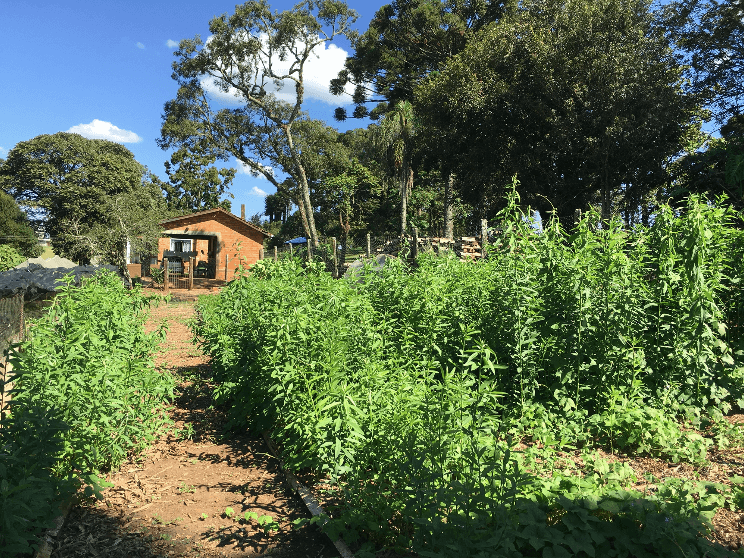 Give it water and sun and wow, it goes green! 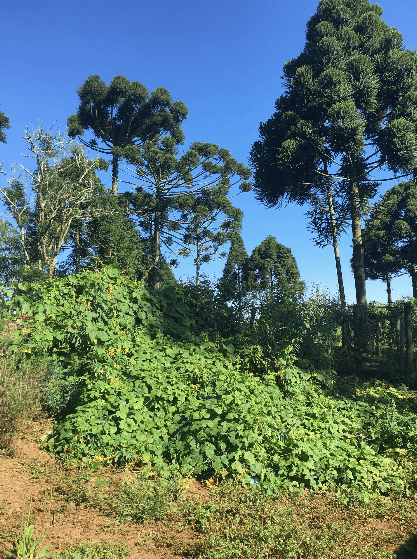 Now it kind of grew a lot. The beans are strangling the Crotalaria. But I will let it be until the first frost to see what happens. Later I will cut all of this and let the green manure decompose to enrich the soil. 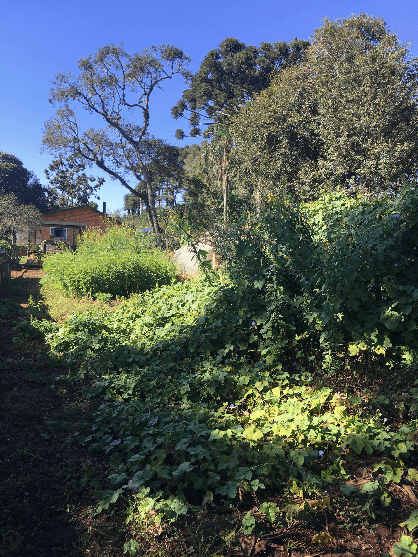 My very own forest. Now we let the chickens in so they can forage instead of eating only corn feed. 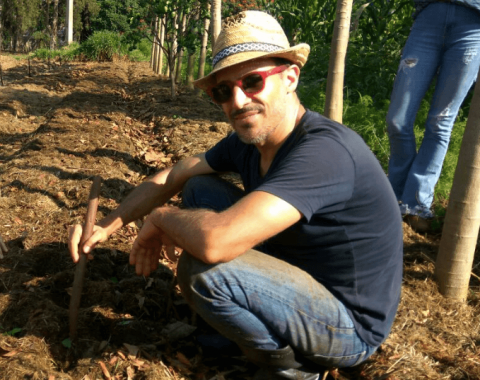 How I got into farming • Como entrei nessa de fazendas 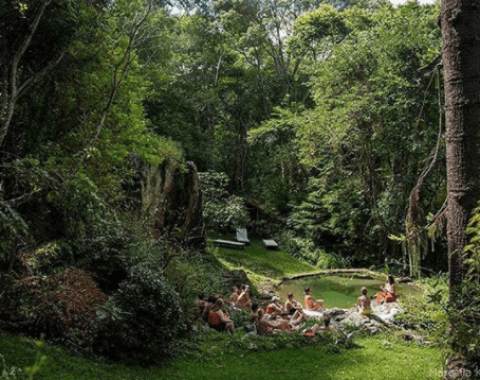 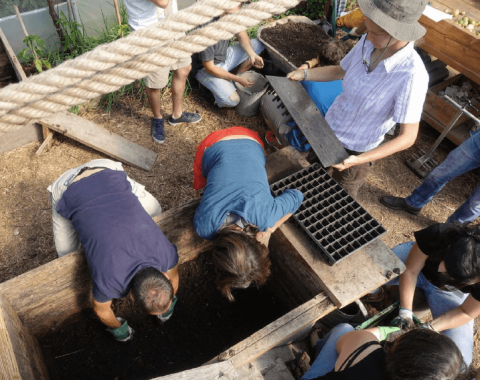